Be Nice to Everyone 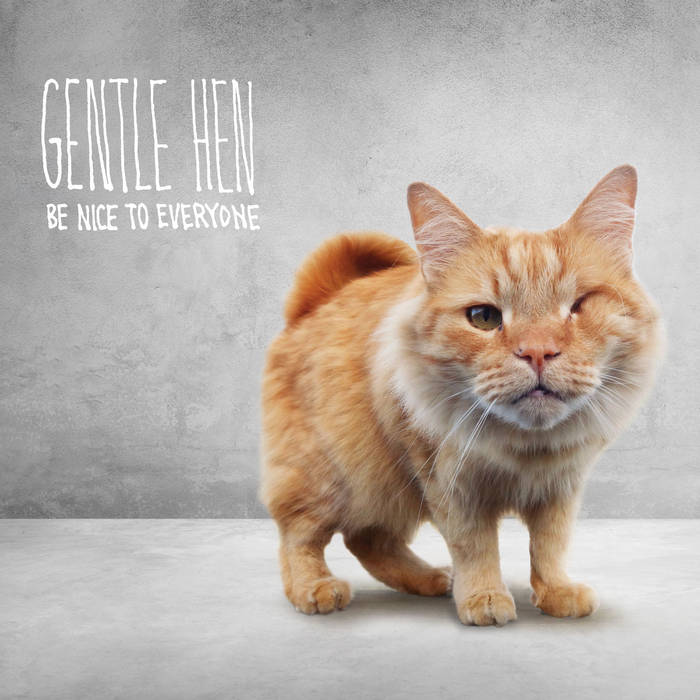 On April 15, 2018 Brian, Max, and I got together at Rub Wrongways Studios. We opened the curtain to let in the spring light so we could see the finally-winter’s-over green plants blossoming while we set up, tuned up, and started to tackle eleven new songs.

We hit the record button at 12:45 and didn’t stop until we made it through all the songs. A few of them we’d been playing a little bit at shows here and there, some of them Brian and Max had heard in demo form, and at least one of them they were introduced to just moments before recording.

It had been a wild and unsettling year since we finished up our previous album, Sneaking up on the Moon. The days had been flashing by in blurs of news stories, each more absurd and troubling than the last. Nights had been filled with concert-going and movies and binging tv shows and generally trying to keep some semblance of light and creativity in an increasingly cynical and upsetting atmosphere.

We dove into the songs like starving animals, giving in to the parts of our brains that thrive on creating and exploring and making sense of chaos. I’d written the eleven songs during this year of upheaval, there were no oldies being revisited. This was all new territory.

As it turns out, the songs fell into a few different genres of rock. It was unintended, I try not to plan too much. The songs know what they are supposed to sound like. The themes reflect the times. The overall push was a quest for kindness, a call for compassion and understanding. Thus the title of the record “Be Nice to Everyone”.

The listener might not find specifics in the lyrics to justify the album title, but I’m hoping that the overall feel of the collection is human, friendly, introspective, and caring. The songs themselves touch on various subjects. Snippets of lyrics jump out: it’s not wrong to long to belong | Jenny emulates a retro charm | the saddest part of town | you read the room wrong once again | the hours ignite in the clouds | grab the scissors, cut the string, and fly | lean, then catch your fall | the wind was like an uncle | they know better, they do worse | that was more than just a joke | arguments, there’s just no winning, the only way to end them is to not begin them.

Over the next few months, I added decorations and voices and snippets. Ken came in and plowed through a burst of inspired musicianship, painting with new colors, with perfect colors. Andrew Goulet set up his pedal steel and layered on a mournful sunset of sounds. We mixed things and then turned them over to Justin Pizzoferrato who deftly mixed them better. He passed the songs along to Mark Allen MIller who mastered them and made them ready so we could share them with whoever might want to listen.

I hope you enjoy this collection. I hope you feel the humanity in it, the rough edges, the sparkles of light, the personal weight.
​
-Henning Ohlenbusch

Produced and recorded by Henning at Rub Wrongways Records

Formerly named School for the Dead.

We love songs and albums.

Track Name: We've Got the Goods
Now and then
Now and then it seems like we’ve got no friends
Then again
Then again we know we’ll always have friends
It’s not wrong to long to belong
Won’t be long until we belong again

Woah oh oh
We got the goods (repeat)
Track Name: She's Got it Bad
Jenny’s always looking for a sign
Simple has to be the first in line
She’s got it. She’s got it bad.

Finds a spot just outside the venue
Hears the shot of a snare drum in and empty hall
It’s the greatest sound that she knows
Claims her space listening to the soundcheck
Checks her face maybe he’ll remember her
Standing in the front row.

Save us, darling. The sun is going down.
Help us, baby. The saddest part of town.
Can’t you see we’re dying to get…

You read the room wrong once again
Grudges you’ve earned them
Bridges you’ve burned them
What was that thing you always said?
Permission is harder
Forgiveness is smarter

And you, you can’t see
That the only thing that all the awful moments have in common
Is you

On those nights when the hours ignite in the clouds,
And you’re afraid you might wake the world, you’re thinking so loud,
Wait. Don’t commit the greatest crime and
Say. I’ll do it better next time.

Try to see what’s slipping right through your hands.
And someday soon you’ll wish you had taken a chance.
Wait. Don’t commit the greatest crime and
Say. I’ll do it better next time.

Picky Cinderella shoeless on a Friday night
Picking out a fella, Mr. Left or Mr. Right
Opens her umbrella, maybe she could be a kite
Grab the scissors, cut the string and fly

Go down to the cellar, looking for a fake moustache
Automatic teller, we trust the robot with our cash
I don’t want to tell her, don’t do anything too rash
Mosquitoes mean that summer’s finally here

A last look around
We don’t make a sound
Until the onramp fires us out onto the open road.

The wind was like an uncle it tousled all our hair
There were dead leaves on the ground and pumpkins all around
Someone got an apple from the back seat of the van
They threw it in the air, it never came back down

Anyway
It doesn’t matter
You can let it go or you can get madder.
Arguments
There’s just no winning
The only way to end them is to not begin them

You put your crossword down and look out at the yard
Who knew that living on your own would be this hard
But you can chose to do anything you want to any time
But what is it?

Compromise,
Might equal freedom
You won't know your soulmates if you never meet 'em.

Bandcamp Daily  your guide to the world of Bandcamp

Featuring Gary Bartz, 5 years of Rhythm Section Intl and an LP of the week by Nicolas Jaar